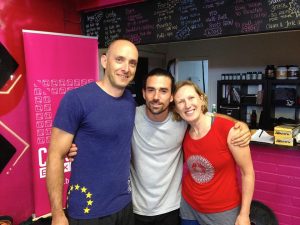 More happy coincidences – a day after I watched part of the video of the Q&A session following the “Ido Portal: Just Move” film, Facebook reminded me that 3 years ago I posted this picture, taken in a CrossFit box in Turku, Finland at the end of 4 days (2 back to back seminars) training with Ido.

A great deal has happened in my life since then, not least 3 more visits to Turku to participate in 4 more of Ido’s seminars. (If you’d like to learn specifics I’ve written about each these visits here, here, here and here). Over that time I’ve been exposed to a lot more ideas around the subject of movement, and a variety of practices. Perhaps it’s always the case that, in seeing something shiny and new, one forgets, or feels less enamoured with what has come before but the photographic reminder of an earth-shattering first exposure to Ido’s work, personality and philosophy, coupled with the many insights to be found in the two films reminded me of how much I owe to this man.

The last seminar of Ido’s that my wife and I attended was ‘Locomotion’, and it left a mark different from the 5 I’d attended prior to it. The truth is that I wasn’t ready for it – the content of all the others had been scaleable, to accommodate a broad range of capability/capacity in the participants, but in Locomotion I felt that in missing some of the basics I was stuck. (Nowadays I think that a full depth pistol squat is basic capacity, but at the time I had let this slip, and was missing a few other basic positions). We were very used to travelling to Ido’s seminars and working very hard, but this was brutal and my reaction to the suffering, and perhaps the feeling of frustration/inadequacy encouraged some cynicism with regard to the content. It was easy for me to see a foundational structure as being too prescriptive – discouraging self-expression in favour of collecting component movements. (Perhaps it was no accident that the next movement workshop we attended after Locomotion was Tom Weksler’s much looser ‘Movement Archery’).

Ido’s seminars were more expensive than others we’ve attended and I was uncomfortable with signing non-disclosure agreements. It’s not something that I’ve had to do at any other movement workshop, and it seems to imply ownership of material which Ido himself was quick to acknowledge had been gathered from all sorts of sources. If nothing else I felt that some other presenters were less protectionist.

As Ido says in the Q&A referenced above, true intelligence is characterised by the ability to hold contradictory views in one’s mind, and as I said above, my first exposure to Ido’s work was earth-shattering. It burst, and shot me out of my bubble so far and fast that for the first 24 hours afterwards I wasn’t sure that I’d be able to go back to my ‘day job’ of teaching Pilates. Not because he had disparaged Pilates (though he had shared a dim view of Pilates teachers’ enthusiasm for certain abdominal cueing/emphasis), or any other practice, but because the breadth of his approach made me realise how little I knew, and how little I’d explored what’s possible.

Discovering, or rather being shown what I had overlooked was a powerful catalyst. And to say I had ‘overlooked’ aspects of movement possibilities is not really accurate – it suggests that they may have been in my peripheral vision but I’d chosen not to look more closely. The things that Ido (and team) showed me over that first 4 days, and subsequent encounters, were nowhere close to being on my radar before then. We also achieved feats of strength and endurance during those days that showed me something more about myself, and that I’ll feel proud of for a long time to come. If I had the will (I want to write “and the time” but I know that making the time is merely a product of will), I have learned the tools, protocols, drills and methods to keep achieving, and surpassing those feats. I think that those first 4 days were the beginning of me recognising the difference between doing and being – between going through the motions and embodying motion. If any of that last sentence resonates with you then you will know that this is a ‘game-changer’. For me it has been both personally and professionally.

This is the motivation for writing this post – watching Ido speak reminds me of what a huge impact his thoughts and methods have had on how I think, move and teach. Embodying movement (forgive me if this seems vague, I do not have another way of expressing this sense at the moment) is a product of, and/or makes for a more intuitive (less paralysis by analysis) approach to moving, and I can’t overstate its value.

Having done workshops with others who have a more freestyle, expressive approach to movement than my experience of Ido’s seminars, it was tempting for me to feel that I had ‘moved on’, that he has nothing more to offer to me. Ridiculous! This was ego creeping in, or self-defense – pretending to myself that the punishment of ‘Locomotion’ was a failing of the material, rather than my own shortcomings. Could one find fault with what Ido delivers? Of course (and I suspect he would be quick to agree), but I think it’s hard to find fault with the quality of the delivery, or to question the sincerity and commitment of his team.

The short version: if you’re AT ALL curious about a brand spectrum approach to movement (especially if, like I was, you’re a single discipline practitioner,) you will have so much to gain from learning from Ido and/or his team. Like me, you may find that the exposure leads you to people/places that you didn’t know existed, and teach you things about yourself that will serve you for a lifetime.