I often think that becoming a Pilates teacher is like learning to drive (though it’s a different driving test now than the one I experienced in the 1990s) – you learn the manual, practice the tricky stuff, hopefully pass the test and then, once you’re on your own, you actually learn how to drive.

Many things helped me to develop as a teacher in the first few years: classes with teachers I admired, teaching within the same space as more experienced teachers, workshops and, of course, teaching classes myself. I belonged to an organisation that ran workshops. Many of the workshops followed the theme of ‘enhancing your mat classes with (insert name of small prop of your choice)’, and these were useful at first. When teaching a lot of mat classes more repertoire seemed like a good way to keep people interested. Teachers from the US were often invited to give workshops at the AGM, and a number of these were very influential for me. I think they helped me to be a better teacher, by enhancing my understanding of Pilates.

I know that I’m not alone in finding that, with accumulated experience, workshops offering new repertoire are of no interest. Similarly, another Pilates teachers take on specific elements of Pilates, or the special tool they’ve developed for teaching a shape or movement are much less interesting than they were. I certainly appreciate reminders of, or insight into, for example why the original order of the network is the way it is but, beyond that, I don’t find that doing Pilates teaches me more about doing Pilates. Most importantly, it doesn’t necessarily help me to be a better teacher.

What to do? For the last 3 or 4 years, most of the professional development that my wife and I have done has been outside the Pilates world but within the broader sphere of ‘movement culture’. I’ve written about this a fair amount already so suffice it to say that we’ve both learned a lot about movement and, therefore, teaching Pilates from people who typically have little understanding of what Pilates is (we’ve encountered the misconception that we’re all about pulling stomachs in a few times…).

I’ve learned about teaching Pilates (being the kind of Pilates teacher that I want to be) from all sorts of teachers: Ido Portal, Rafe Kelly and Andreo Spina to name a few.

We’ve been very lucky to work with some of the people that we have and, for me, none more so than Tomislav English, whom we did a workshop with at the beginning of this year. Based on a brief conversation, I think his concept of Pilates is a bit ‘off’, yet I keep thinking to myself that he’s the best Pilates teacher (with the exception of my wife) that I’ve met in a long time. Weird, eh? He doesn’t really understand Pilates (as far as I could tell) but he teaches it really well!

How could this be? The way that Tomislav teaches seems to me to embody Pilates’ intentions. He began the four days by making it clear that, although it was advertised for ‘advanced movers’, no-one had been turned down from attending, on the basis that full commitment was expected. There’s a lot of movement, and not a lot of talking – demonstration with instructions, a check that it’s clear and then practice – clarification following if necessary – overall his teaching is uncomplicated. There’s a lot of control required, but it’s not control of stillness (which seems to often be the desirable thing in Pilates classes, and seems to have little ‘real-world’ transfer) but control of EVERY aspect and moment of the movement – range of motion under conscious control. Smooth movement at an even tempo, that can be paused or reversed at any point.

The language that he used has influenced my teaching, too. Again, he was quite spare with his words, and would often categorise someone’s demonstration as either ‘clear’ or ‘unclear’, which translates to me into how I’m watching when I’m teaching. Can I see clearly how someone is moving? If the movement stems from the hip, do I see their hip joint moving, or is it a bit blurred? When joints are maintained in good positions (congruent, if you like) movement has greater clarity. Greater precision, we might say, as Pilates teachers.

It’s worth mentioning too that we paid only £15 more for 4 full days with Tomislav than the price of four hours with a teacher from the US that I’ve just seen advertised.

I don’t want to suggest that I have nothing to learn from other Pilates teachers, far from it (Benjamin Degenhardt deserves an honourable mention here), but my teaching – eye, understanding, vocabulary etc. – has been hugely enriched by fishing in a much larger learning pond.

*Perhaps ‘better Pilates teacher’ needs defining. I’m not interested in teaching people to become proficient at performing repertoire, or even excellent at performing it, unless this is an expression of enhanced awareness, range of movement, and understanding of how to organise their joints well. So being a better Pilates teacher, to me, means having the insight and tools to help people achieve those things. Not having a greater variety of exercises in my toolbox. 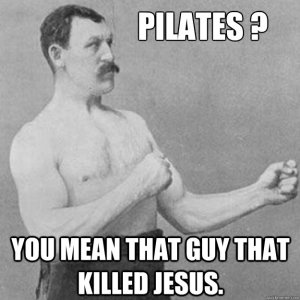 My only qualification for writing this is my Y chromosome, there may well be influence of my own neurotransmitter preferences on my views, so while this is written as if I’m speaking for my gender as a whole, please note that different viewpoints may be available.

Infantilise me. Babies and toddlers might have ‘tummies’ (perhaps some postpartum women might), but I do NOT have a tummy, or tummy muscles, and I won’t feel that I’m in the right place if you imply that I do.

Teach me to engage my pelvic floor. (Unless I’ve specifically told you that’s what I’m looking for) It works fine, thank you. And if you ask me to think about walking into the sea, or another body of cold water, I’m likely to think of shrinkage – not what I’m looking for in my exercise class (especially if I’m already wondering how manly the class is).

Use my bra strap as a reference point. I’m not wearing one. Yes, I do know roughly where you mean, but you’re reminding me that I’m doing women’s exercise, thanks.

Make me feel ‘special’ by relentlessly focusing on what I’m struggling with. Ok, I’m not great at some of this, but I don’t enjoy feeling incompetent. My ego is fragile. Maybe, if I need it, take me aside after class and show me one thing that might help.

Give me some purpose. Don’t assume that I know why I’m doing this movement. How will it benefit me? Maybe not with every exercise, but a few times each class.

Give me some rules. I like rules – they give me clarity. When I’m doing exercise X I know that the rule is my arms should always be in position Y…. It’s like having a manual in my head.

Give me measurements. How will I recognise if I’m doing it right, or not? Like a checklist, perhaps: Are my shoulders off the floor? √ Is the bottom of my ribcage down on the floor? √ Are my legs in the air? √ Are my elbows straight? √ Etc.

Give me something to aim for. Maybe show me something that’s beyond me at the moment, and then give me an idea of what I need to do to achieve it.

Drop some science on me. I’m not the biggest fan of science as the answer to everything, but if you let me know that the ability to perform an isolated hip hinge is well correlated with reduced risk of back and knee injuries, for example, I might feel more like I’ve come to the right place.

Relate the exercises to stuff that I like. Let me know how it’s going to apply to my martial art/tennis/deadlifting/football…. (this may mean doing some research into the requirements of these activities)

Allow me the opportunity to do something well. Maybe I don’t cope very well with fluid choreography, for example. (As I mentioned above, my ego is fragile). Throw in something which plays to my strength/s, so I have something to feel good about.