This subject may have been done to death, but the last post that I wrote garnered reaction from a number of people, specifically in relation to my writing that “I may have uttered the phrase ‘neutral spine’ at some point in my life” (as if that were a bad thing). So, it seems like something worth addressing, and having done some hunting in books and via the internet, there is plenty of (at least) potentially conflicting information available.

Neutral posture is defined as one “where the joints and surrounding soft tissues are in elastic equilibrium and thus at an angle of minimal joint load”.

If you’re going to be lifting weights, whether a barbell or bags loaded with a weekly shop, neutral is a fantastic place for your spine to be. There will be load on your spine, because it is the transmission from your arms (carrying the weight) to your hip joints, which should be moving the weight, but the load will be distributed evenly through the joints. If you are a Pilates teacher, or enthusiast, you probably know what Joseph Pilates believed about spinal flexibility – he wrote, in ‘Return to Life’ “If your spine is inflexibly stiff at 30, you are old. If it is completely flexible at 60, you are young.” In the lifting example though, the facility to maintain stiffness in your spine is very valuable.

One of the foremost proponents of spine stiffness is Prof. Stuart McGill (the link is to an article that he wrote) who has spent years researching spines, and apparently gathered lots of evidence that supports his theories.

I can’t disagree with a lot of what Prof. Mc Gill says in the video (and what right, as a layperson, would I have anyway?), especially in relation to the importance of lifting with the hips and not simply bending your knees. I heard recently of research on dancers showing a strong correlation between poor hip hinging (the ability to hinge the trunk around the hip joints without spinal articulation) and both back and knee pain – back pain especially. There would seem to be a strong case for making sure that the people we teach understand how to hip hinge (to powerfully extend their hips, you might say.)

Are there exercises in Pilates that involve the spine acting as a static transmission of load from one extremity to another? Absolutely. And there are also, of course, plenty that require us to sequentially articulate our spines, or to maintain spinal flexion. I suspect that the work of Prof. McGill has caused some teachers to believe that we should be avoiding lumbar flexion (it seems to be regarded as more sinister than thoracic or cervical flexion, presumably because the majority of disc injuries occur there). If you look you can find video online (try “the Pilates Nun”) of the Rollup being taught with a neutral lumbar spine, so as to keep it safe. If you peruse Professor McGill’s ‘Ultimate Back Fitness and Performance’ book you will see that he particularly advocates exercising with lumbar in neutral for people who have had back injuries or back pain: “Generally, for the injured back, spine flexibility should not be emphasised until the spine has stabilised and has undergone strength and endurance conditioning – and some may never reach this stage!” (page 47). This is not at all the same as never, ever flex your lumbar spine, yet this is what some people have taken from his work.

As a concept, neutral spine seems to be predominantly taught lying supine, which is curious to me because it seems to be the one position where neutral has least value or application. Under what circumstances, when lying down, do you need to maintain a neutral spine? If the only answer is ‘during exercise’, then we have to wonder what the purpose of the exercise is. I’m referring to mat based exercise, Footwork on the Reformer, and similar exercises with straps/springs being an exception, because you are applying force from your hip joint against mechanical resistance – they are mimicking deadlifting and squatting while supine. There is not a single exercise in ‘Return to Life’, beginning from a supine position, that calls for neutral spine, so it would seem reasonable to say that any pre-Pilates exercise (that is truly progressing toward an actual Pilates exercise) would not call for it either.

You might want to encourage a neutral spine in standing, in which case this is entirely dependent on the leg/pelvis relationship. If that is well organised – pelvis neutral – then cues related to axial elongation will surely help to achieve an appropriate spine position. After all, as Shari Berkowitz writes in her blog post ‘Neutral Pelvis and Neutral Spine: What are they and why do we care?‘, neutral spine is not a specific shape but unique to each individual. And, with that reference, ‘neutral pelvis’ rears its head.

Neutral pelvis, defined by Ms Berkowitz in her article as: “ASIS and pubic bone in line with each other in the Coronal Plane”, seems to me a more appropriate thing to be talking about than neutral spine, but do we really need to talk about it at all? Yes, it may well be a helpful cue to some, and my discomfort with the term may be a little irrational. (I’m much happier talking/thinking about organising one’s pelvis on the top/end of one’s legs..) Once again, I have to wonder if the term has a place in Pilates – particularly the matwork? 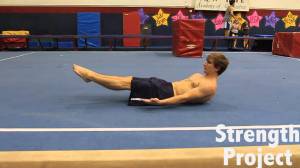 Many gymnastic exercises involve the hollow body, or ‘dish’ position, and it seems to be central to gymnastics foundational strength programs (Gymnastic Bodies, for example). Having been introduced to the hollow body position it became apparent to me that this was the basis for a number of Pilates exercises – The Hundred; Single & Double Leg Stretches; and even The Push Up (ask any gymnast – push ups aren’t done in ‘neutral’). In fact, the second picture accompanying The Double Leg Stretch in ‘Return to Life’ is identical to the picture above. According to gymnastics coach, and author Carl Paoli, the hollow body is fundamental to learning to control your lumbar spine against the natural tendency to excessive flexion. It seems entirely natural to me that Joseph Pilates would have adopted this idea from gymnastics, which was particular popular in Germany.

One of the most valuable elements of the hollow body position for me was the understanding that my spine is organised by my glutes. My abdominals can then go to work to help to sustain that organised position but, under load, my glutes (the auto spell check is determined that I use my flutes to organise my spine…) are paramount. In a supine position this has the effect of lengthening my lower back into the ground, rather than jamming it down, and it becomes a much more sustainable position than it used to be for me. I would go as far as to say that my abdominals depend on the efficient functioning of my flutes (see?) to be able to function efficiently themselves. This does not equate to neutral pelvis.

Aside from it not seeming to be what Pilates himself was teaching, the problem with ‘neutral pelvis’ is that, once you take yourself away from either vertical or horizontal, the term has no meaning, except in relation to your spine. So, when a teacher calls for a variety of exercises from the original repertoire to be performed in ‘neutral pelvis’, I suspect that what they are really saying is ‘lumbar neutral’. If that is what’s intended, why stop there? If you flex your thoracic but not your lumbar then one would think that there would necessarily be significant intervertebral compression in the lower thoracic. If it is truly important to keep the lumbar in neutral, then why not the thoracic and the cervical? Where does that take us? Everything neutral in the sagittal plane only allows us to include The Twist, Side Kick Lying and Kneeling, and The Leg Pull (if you’re careful).

Under those circumstances, Pilates, as an exercise method, is dead – killed by the creeping influence of physiotherapy and disc injury and rehabilitation research. If you think that gymnastics may not hold all the answers to sound movement then I’d agree – practiced at an elite level it’s probably not fantastic for your health. That doesn’t mean that the basics haven’t been worked out over a long period of time – at least a century more than Pilates has been around. Gymnastics, like Pilates (I hope) is also very much concerned with having control over one’s body in movement. Can the same thing be said for the advocates of ‘neutral’?